We are pleased to announce that 2020 marks our second decade of innovation and world-class service in the market research facilitation industry. Our consistent commitment to excellence and client success has remained a constant thread throughout 20 years of our technological and brand evolution.

Since Civicom began in 2000, we have dedicated ourselves to remaining on the cutting edge of marketing research technologies and sustaining our industry presence. Civicom was originally named PlezeCall, where we co-developed the next-generation SIP/VOIP platform that was the first of its kind in the world. After demand emerged for audio interview facilitation services from marketing research firms (who started as our conferencing customers), we offered our phone interview service in 2002 to reach a broader market. Our first market research interviews happened then.

By 2004, we officially launched Civicom Marketing Research Services (MRS) to fully cater to the growing demand from the market research industry for web-enabled in-depth interviews and focus groups. In 2005, we developed TranscriptionWing™, our general transcribing unit, to assist our conferencing and market research customers with their transcriptions.

In 2006, our Market Research Services unit embraced a broader pledge to further the impact of market research by becoming proud sponsors of the Qualitative Research Consultants Association (QRCA). The company’s support of this association was the first of many global marketing research connections. Our consistent growth necessitated not only stronger ties with industry associations but also an expanded presence geographically. Civicom MRS also opened an Asia Pacific location in 2008 followed closely by our Kansas City location in 2009. Following 2010, we consistently expanded our client offerings to remain on the cusp of changes in communication technology and market research. 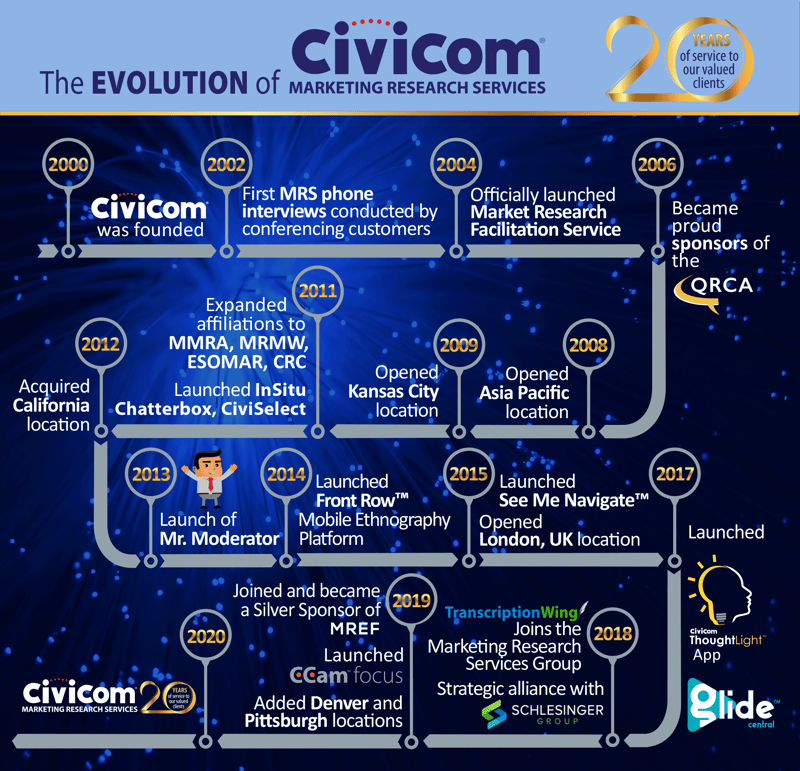 In 2011, we launched three major offerings. Civicom InSitu® Mobile Research equipped market researchers with a qualitative tool to conduct audio diaries and patient journeys. Civicom Chatterbox® began to offer clients access to a market research online community platform to conduct and manage asynchronous bulletin board projects. CiviSelect™ was also launched to provide clients with an one-stop shop option to recruit respondents for their market research studies. It was also during 2011 when Civicom MRS established affiliations with leading associations, communities, and conference groups worldwide such as the Mobile Marketing Research Association (MMRA), Market Research in the Mobile World (MRMW), European Society for Opinion and Marketing Research (ESOMAR), GreenBook, and Quirk's.

In 2012, TranscriptionWing™ launched ListenLink™ which is an in-transcript live link for easier review of recordings. We also acquired an additional location in Carlsbad, California.

To further build and strengthen Civicom’s MRS unit, we developed its mascot, Mr. Moderator, in 2013. The pace of change in marketing research facilitation did not subside and Civicom MRS consistently matched that pace with new services. Front Row™, a mobile ethnography platform allowing researchers to engage with respondents outside of facilities, was launched in 2014. Civicom also founded Feathers Project, a non-profit organization that allows donors to support people that are in extreme involuntary poverty through 100% direct charity.

In 2015, Civicom MRS introduced See Me Navigate™, a game-changing solution for testing website and mobile app usability. We added a location in London during the same year to support client qualitative research needs throughout the UK and the EU. In 2017, we developed Thoughtlight®, an mobile insights app for conducting mobile ethnography studies that replaced Civicom InSitu. We also launched Glide Central®, an online audio and video management platform designed specifically for market researchers to organize, manage, and curate their qualitative research content and findings, while also creating video clips and storyboards.

Our TranscriptionWing™ unit became part of the Marketing Research Services Group in 2018 to create better synergy between the two services. 2018 also marked a strategic alliance with Schlesinger Group, a global leader in recruiting for thousands of marketing research studies annually. Pairing Schlesinger Group’s expertise with our leading web-enabled qualitative solutions give our clients the ability to conduct virtually any type of phone or online study combined with high quality recruiting services.

In 2019, Civicom MRS expanded on all three fronts–locations, industry involvement, and new offerings. The company added locations in both Denver, CO and Pittsburgh, PA. It joined and became a silver sponsor of the Marketing Research Education Foundation, a group dedicated to using the marketing research community’s resources to further child and youth education worldwide. We also launched CCam focus™, bringing HD 360° location-based video streaming capabilities along with integrated video curation tools to its clients. In 2020, Civicom MRS is proud to renew its commitment to the hallmark of its success: Your Project Success is Our Number One Priority.